NIRON was installed in Conte Forum at Boston College in Chestnut Hill, Massachusetts. Once again, the system showed to be particularly suitable to be used in large buildings. NIRON pipes and fittings from 2" to 8" were selected for the cooling tower lines thanks to the special characteristics of their raw material. The Silvio O. Conte Forum, commonly known as Conte Forum, Kelley Rink (for ice hockey games), or simply Conte, is an 8,606-seat multi-purpose arena which opened in 1988 on the campus of Boston College in Chestnut Hill, Massachusetts that lies within the Brighton neighborhood of Boston. Conte Forum is home to the Boston College Eagles men's and women's basketball and ice hockey teams as well as the Boston College Marching Band. The pipes and fittings that compose the NIRON range are in fact produced using random copolymer polypropylene PP-RCT, a plastic material with a special molecular structure ensuring high mechanical resistance and duration, even at high temperatures and pressures. The properties and other features of the various components make the NIRON system a great alternative to traditional material used in plumbing installations. Its temperature/pressure performance allows for the use of thinner pipes thus offering a greater flow rate with the same diameter. 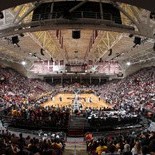