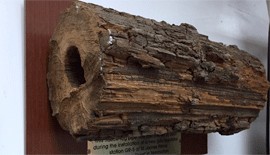 This hollow log pipe used for gas transport was discovered in 2007 during the installation of a new gas regulator station GR-5 at St. James Place and Madison Street in Manhattan, probably installed by Rochester Natural Gas Light Company. The earliest pipelines were natural tubes, such as hollow logs or bamboo used by the Chinese. Hollow log pipes were largely used for the transport of natural gas in the US in the 19th century. The primary obstacle to the expansion of the natural gas industry in mid-19thcentury was inadequate pipeline facilities and technology, not lack of supply. Hollow log pipelines leaked and disintegrated, but cast and wrought iron lines also suffered from significant intrinsic defects. Gas leaks were common problems. Natural gas was not used on a large scale until the 1880s and gas wells were most likely to be abandoned when oil was not concurrently discovered. An example of early abandonment occurred in 1865 when a 480-foot drilling effort struck a natural gas reservoir near West Bloomfield, New York. Because the investors were disappointed that oil was not discovered, they abandoned the project. Not everyone was disappointed that this well contained only natural gas. Several businessmen formed the Rochester Natural Gas Light Company and purchased the same gas well in 1870. The nearest town desiring natural gas was Rochester, about 25 miles away. The company constructed a pipeline system to connect the well with the town. They built a pipeline out of Canadian white pine logs that were glued together and bound with twine. The 2- to 8-foot log segments were planed to a uniform 12.5-inch exterior diameter, and they were bored for an 8-inch interior diameter. Construction and maintenance of the wood pipeline system was particularly problematic, but the company began transporting natural gas during the winter of 1872. Continuing problems with gas transportation facilities caused significant problems for the company; rotting and leaking wood pipelines simply prevented the adequate transportation of natural gas from well to consumer. Soon, the company stopped operations. Luckily enough, nowadays NUPI produces and supplies safe and strong pipelines for gas transport made of the most modern thermoplastic materials that guarantee no leaks or corrosion!. 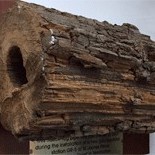